To be honest I didn’t know anything about this organisation, and it was only through a lucky coincidence whereby I parked alongside a Community Greening car on a visit to the supermarket that I managed to find out about them. I was planning the project that we’re currently working on at the time so I thought I’d give them a call. A few phone calls and emails later and I was in contact with Brenden who agreed to come for a visit. What a fantastic connection this turned out to be.

This is a brief recap of the day.

Brenden arrived at the start of the day at 8am and immediately began to bring gardening equipment, trays of seedlings, etc. over to the vegetable garden. He met with Ashleigh, John and I, we introduced ourselves and began talking about stuff. What we do, what he does – that kind of stuff. John also showed Brenden which areas of the garden could be used for the @2CMEPS farmers project. Then Brenden came and met 2C!

This was really cool.

Brenden is an Aboriginal guy and as such he knows a lot about Aboriginal culture and tradition. So pretty much the first thing that he did was sit down with 2C, take out a didgeridoo to play a song for the class and ask them to guess all of the native animals that were being portrayed in the song. So cool!

He then explained some of the meaning behind the artwork on the didgeridoo and told 2C of how the instrument had been passed down through his family and was given him by his uncle. He then told the class that he didn’t want to pass the didgeridoo on any further because he thought it was too special! Who would wanna give that away? 🙂

Brenden was a natural with the kids and they were really engaged and interested in the experience. It was really cool to be a part of the whole thing.

Brenden then led a class discussion on fruits and vegetables, healthy eating, food and how it relates to the garden, and a few other things garden-related before heading out into the garden with 2C.

The kids were unsurprisingly excited about this, and quite a few of the students had been waiting for the opportunity to get out into the garden since the first mention of ‘getting their hands dirty’ during my initial Twitter Q&A with them before I arrived. The first thing Brenden did was get the students to head out into the garden and rip out all of the unwanted vegetation from the previous crop, weeds and rubbish, etc. from the predesignated garden areas.

The vegetation was placed into the chook coop and the rubbish, plastic, etc. separated as best as possible from everything else and placed into a bin. It was a bit chaotic at times, as you might expect when a bunch of seven or year-olds get out to work in the garden, but I thought it was completely brilliant! 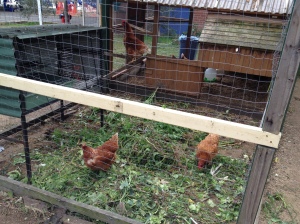 We then gathered in a circle and Brenden spoke to the class about the process of plant growth before giving some of the students a chance to plant a few rows of seeds. 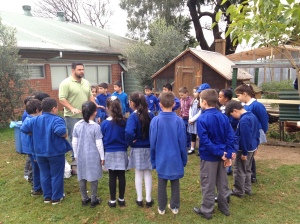 This whole process took a little longer than initially expected and by this time it was pretty much time for recess. Brenden joined us in the staffroom for some morning tea and was able to make some connections with some of the other teachers and forge some plans for future visits to the school!

We have an upcoming day later in the term to celebrate Indigenous culture and Brenden plans to come back to perhaps establish a bush tucker garden and lead a native flora walk around the school with some of the older students.

I think this is really cool, because to me it means that other classes, in addition to 2C will now be able to benefit from Brenden’s visit to the school. Epic!

Additionally, after recess Brenden worked with Mr. B’s class who learn in the classroom next to ours, they planted the seedlings that he brought with him to the school. Again this shows that Brenden’s visit had an impact beyond 2C’s classroom, really stoked.

I had a chat with Brenden before he left and he is going to send me his timetable for the rest of the term. He plans to come back to check on the garden later in the term to see how 2C have been going with their ‘Friday Farming’.

I can honestly say that this has been one of the most enjoyable and rewarding experiences of my journey to becoming a teacher to date. 🙂

One thought on “Visit from Youth Community Greening”